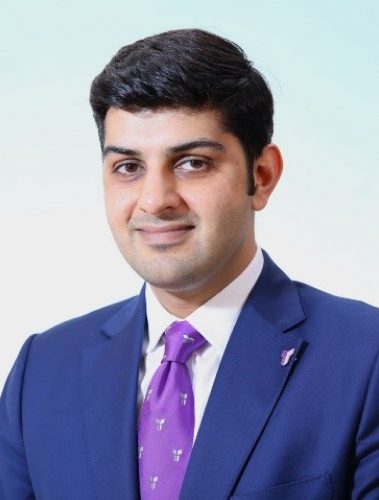 Angad Rajain is the Chief Strategy Officer (CSO) & IFM Head at Tenon Group. With an impressive corporate experience of more than a decade, impeccable leadership, and strong strategy orientation, Angad is responsible for overall strategy planning & execution in the organisation including Peregrine Guarding, Tenon FM, and Soteria.

Angad has demonstrated expertise in core functional areas such as operational excellence, technology-led innovation, financial decision-making, mergers & acquisitions, and capital funding. He aligns the company’s strategic initiatives in line with its long-run goals and vision. Mainstreaming sustainability through technological advancements and creating stakeholder value through tactical growth and operations are his key focus areas.

Angad started his career at one of the world’s leading financial organisation, BlackRock, as an Associate in 2009, after graduating from New York University with Bachelors in Finance & Accounting (Honours). During his stint at BlackRock, he handled the portfolio of prestigious clients like Boeing, FedEx, NYC Retirement System, advising them on financial investments during the Global Financial Crisis of 2008.

After his successful stint at BlackRock, Angad went to pursue Masters in Business Administration (MBA) in 2014 from the Yale School of Management.

A lateral thinker with a strategic approach, Angad joined Tenon Group in 2014 and has served the Group in many important capacities, developing a rich set of experiences. In his previous role as Global Head of Integrated Facility Management (IFM), he single-handedly led the Facility Management vertical of Tenon Group, Tenon FM (India & UK) which has been ranked as one of the largest Indian employers in the UK by CII & Grant Thornton for three consecutive years. In 2020, Angad was awarded the Young Security Entrepreneur of the Year Award by the Central Association of Private Security Industry (CAPSI) during its 15th Security Leadership Summit. In 2021, he was conferred with BW Young Entrepreneur Award by BW Businessworld. He has also been featured in the Realty+ 40 under 40 prestigious 40under40 list of Young Tycoons in the Real Estate industry 2021.

Prior to this, Angad was assigned the role of Managing Director of Tenon FM in 2016. During this tenure, he had been instrumental in transforming Tenon FM as an industry leader. Given his outreach, expertise, and vision, Tenon FM is today one of India’s leading, tech-enabled facility management services providers.